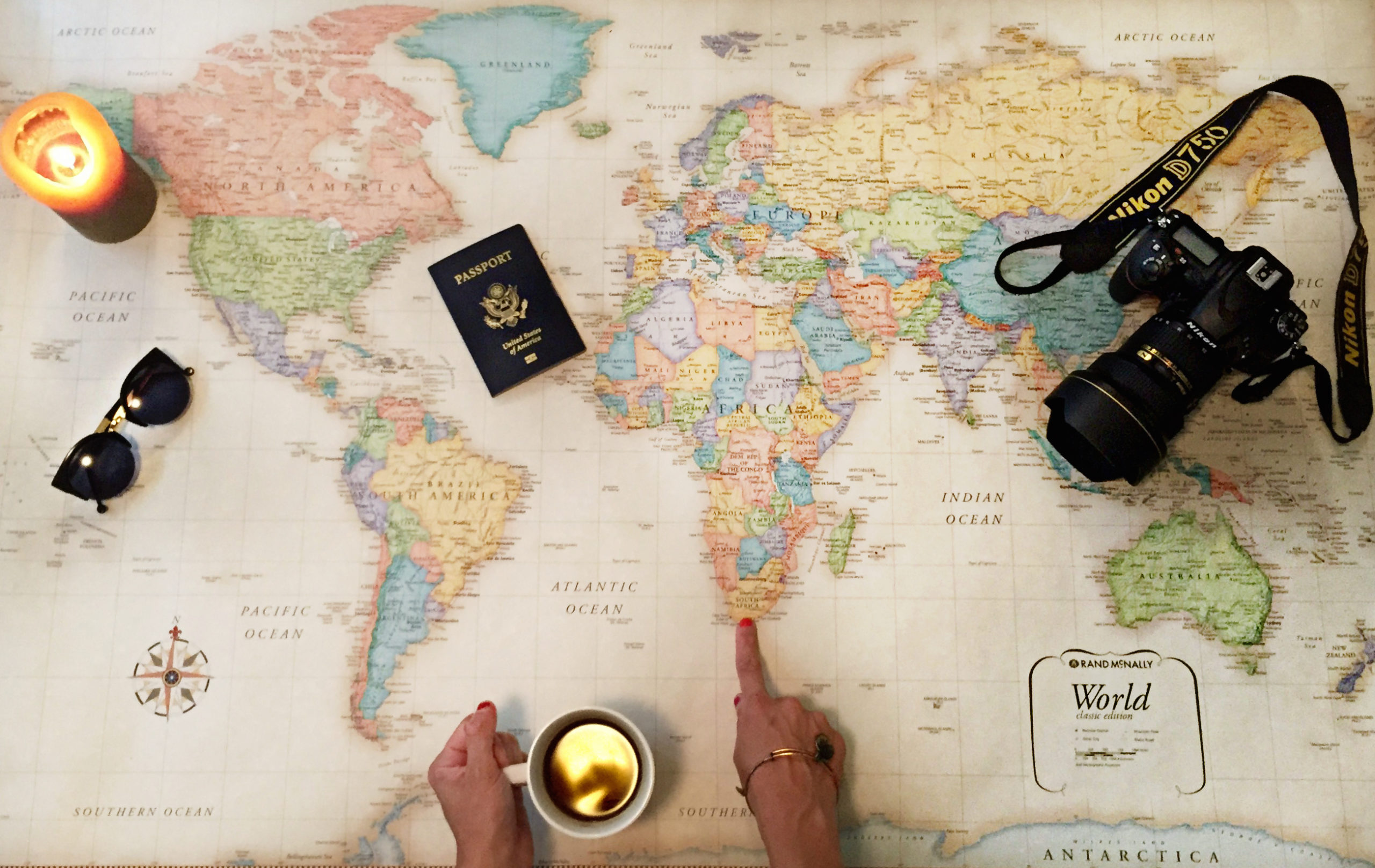 In the winter of 2014, Cassie started planning for what would be ‘Expedition 196’: A journey to all 193 Sovereign Nations (plus Taiwan, Kosovo and Palestine) for peace and responsible tourism, and to attempt to break two Guinness World Records to become the first woman on record to travel every country in the world.

Her initial departure was to be on July 12th, 2015 to Auckland, New Zealand, so that day she packed up her big, blue Osprey backpack and headed to Los Angeles International Airport. Upon checking in for her flight with Air New Zealand however, she encountered a problem. The attendants asked her for an onward ticket from New Zealand, for which Cassie showed them her receipt for her onward ticked to Tonga. That didn’t do it for them, they required “a return ticket back to the USA”. Cassie became frustrated, since that ticket cost her a couple thousand dollars (booking last minute), and she had all that the airline and country needed – a ticket out of their country within reasonable time, which, for Cassie had to be less than 14 days. Flash forward, there’s no such thing as that sort of requirement when traveling to New Zealand, in fact, she traveled to New Zealand during her Expedition without even so little as an onward ticket. It just happened to be a fluke that those attendants were just having a bad day. Disappointed, she turned back and announced her new launch date; July 24th.

On July 24th, 2015, Cassie again, left for LAX to head to her first country, Palau. Her thoughts were to start with Oceania and get more of the expensive, visa-less countries out of the way before heading to Europe, her next segment which requires hardly any visas, while she worked on her Asian, African and Latin American visas.

A question that I get asked often is; Can I see your route? Which exact route did you go, did you have a map?

If you see below, I did have an original map, which actually turned into another hand-drawn map, and one last one before turning to docs. I changed my route nearly every single day based on visas, meetings with the students, budget restrictions, and the like. I do have a very long document that details my journey every step of the way (which I submitted to Guinness World Records (GWR) for proof), and yes, perhaps I could turn that into a map. But, essentially, I did save the most challenging for last, that being Turkmenistan, Yemen, Syria, Somalia and Pakistan. I should have worked on those visas and traveled there first, but my parents were worried and thought that if I waited, things would get better. I knew they wouldn’t.

The above map was constructed over a period of months her little studio in Calabasas where she would come home after her 11 hour, 7 day/week work days (where she worked a babysitting job in Woodland Hills and a babysitting job in Calabasas), and plan. She purchased the following books to help her unleash my inner power woman and entrepreneur, to plan the business aspect of her Expedition; The Pumpkin Plan, $100 Startup, Start Something That Matters, Toilet Paper Entrepreneur, The Art of Non-Conformity, 4-Hour Work Week, and a few others, all of which she read over the course of a month or two. These books, in cohesion with forming an LLC, applying for visas, working together with two non-profit organizations, planning meetings with university students, reaching out to hundreds and hundreds of businesses for sponsorship acquisition, applying for the GWR and ensuring she meets all requirements for proof, all of these tasks, filled all of Cassie’s days.

Between her two, 80 hour/week babysitting jobs and planning for this Expedition, as well as practicing Krav Maga and continuing to train for triathlons, meant that Cassie had zero percent chance at maintaining any social life. That wasn’t important to her, though, she knew that this Expedition would take an immense amount of dedication and work, but that it would pay off for both making her mark through “positively enhancing the world we live in” and developing her career.

“Expedition 196”, as Cassie dubbed it, took her a total of 18 months and 10 days to travel to all 193 Sovereign Nations (plus Taiwan, Kosovo and Palestine). She spoke to over 16,000 university and high school students on important topics like women’s achievement, responsible tourism and peace through economics, in over 40 countries. She met with Mayors, Ministers of Tourism and even with the King of Spain. She planted trees in as many countries possible, so as to both offset her carbon footprint it took to get there, and further educate the youth on the importance of responsible tourism. She volunteered for an organization called ‘Adventure Scientists’ whereby, she collected water samples from our worlds waterways to then send back to the lab where they could test the samples for the presence of micro-platics, as part of their National Geographic-funded endeavor to combat micro-plastics.

On February 17th, 2017, Cassie completed her Expedition around the world and has since started a non-profit, as well as having encouraged hundreds of thousands of youth to follow in her footsteps. 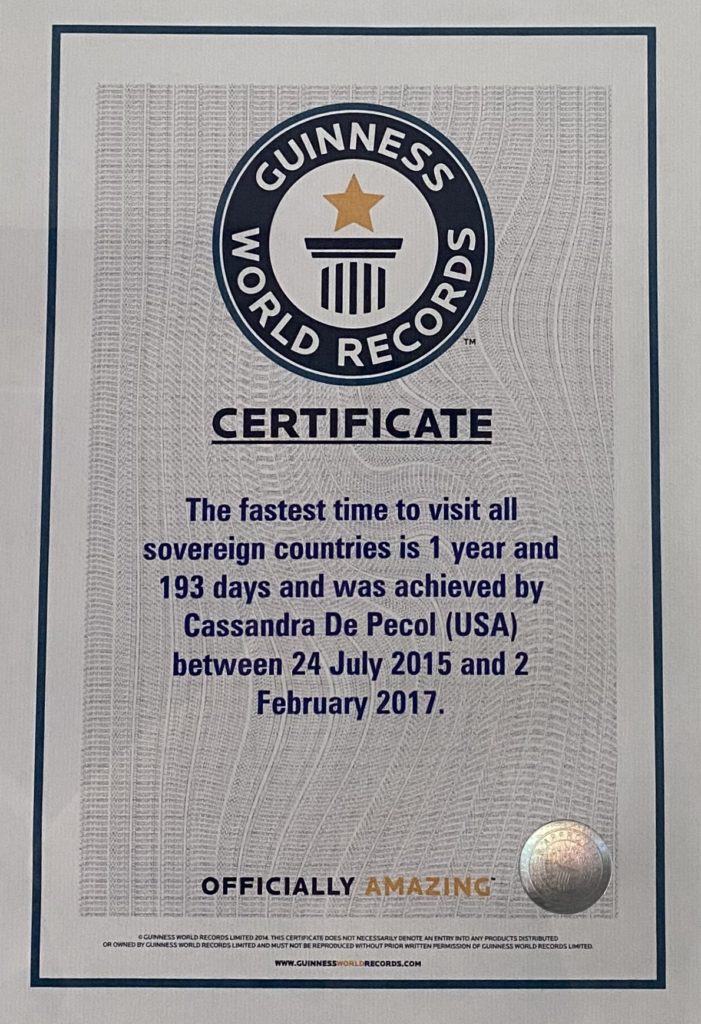